Important : This real money game is not available to players located in Australia. Click here to find out why. Players living in New Zealand (and other non restricted countries) are welcome to play.

Cinerama is a low limit progressive pokie with a Hollywood theme and five line. The game has a starting jackpot of $15,000 and you win the progressive by lining up five of the wild Camera symbols.

Cinerama is a five line pokie game with a progressive jackpot and a very low maximum bet of 25c*. The main draw card is the progressive which starts at $15,000 and has gone as high as $288,887 before being won.

To win the progressive on Cinerama you have to play the max bet which varies based on the currency you play in. The base bet is 25 cents in US Dollars and this is converted into your currency.

This means it can be more or less than 25c depending on whether your selected currency is stronger or weaker than the US Dollar.

The Camera symbols are wild and pay the progressive jackpot as long as you're playing max bet. If for some reason you decide to play less than max bet the five Cameras pay 10,000 credits or $500.

Cinerama has two extra features that are won with either three Director symbols or a Headphone on the first reel. The features are in keeping with the Hollywood theme although don't get too excited as the wins from the features are always tiny.

Important : This real money game is not available to players located in Australia. Click here to find out why. Players living in New Zealand (and other non restricted countries) are welcome at the following casinos. 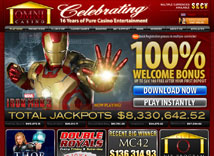