The Lucky Nugget is a popular online casino operated by the Belle Rock Gaming Group where you can play over 250 pokies and some of the biggest progressive jackpot games available online.

The Lucky Nugget does not accept players located in the United States.

The Lucky Nugget is an online casino with a theme that pays tribute to the days when gold rushes were taking place in Australia and around the world. These days it's unlikely you'll find a big gold nugget in Bathurst, Bendigo or Kalgoorlie but you can still strike it lucky at the Lucky Nugget.

The casino uses software from Microgaming, is licensed and regulated by the Malta Lotteries and Gaming Authority and is owned by the Belle Rock Gaming Group who also run Jackpot City and The Gaming Club.

The Lucky Nugget is powered by Microgaming - one of the worlds leading casino software providers who have been in the business since 1994. The instant play version is PC and Mac compatible as well as compatible with mobile devices.

When it comes to pokies, The Lucky Nugget has over 250 different titles to choose from with a wide range of both themes and game styles. The game range is always growing with new pokies being released every month.

The payout percentages of all of the games including the pokies are independently audited and published online. Over the last decade these reports have shown an average for the pokies of over 95% which is much higher than you will ever get at your local gaming venue.

You can also try your luck on a big selection of casino games from card games like blackjack, baccarat and Caribbean Stud to table games like sic bo and roulette. The casino also has a particularly good range of cardies with RTP's on these games going as high as 99.92% (All Aces).

The Lucky Nugget has a mobile casino that features all of the same games as the desktop version. There is a version of the software for pretty much every mobile device including all smart phones and tablets.

If you're looking to strike it really lucky then the progressive jackpot games are the way to go. Below are the current jackpot totals.

The Lucky Nugget accepts the following deposit methods - VISA, Mastercard, Debit Cards, NETeller, POLi, Skrill, Bank Transfer and UKash. The minimum deposit varies by method but is generally between $5 and $20.

All transactions are securely processed by Datacash Ltd which is an online payment processor owned by Mastercard and founded in 1996.

Withdrawals are processed quite quickly after the 48 hour pending period that starts when you request a cash out. For the fastest withdrawals we suggest the NETeller web wallet where you can then withdraw your winnings in cash at any ATM. Other options include bank transfer and cheque.

The Lucky Nugget has a lot of on-going promotions that include offers like free spins, tournaments and random giveaways. All players can also get extra money to play with by collecting the loyalty points that you get for every bet you make - win, lose or draw.

The casino also has a VIP Gaming team who take care of the high limit players with exclusive promotions and a range of other rewards.

The Lucky Nugget does not accept players located in the United States. 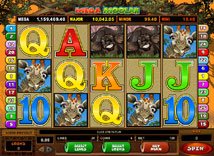